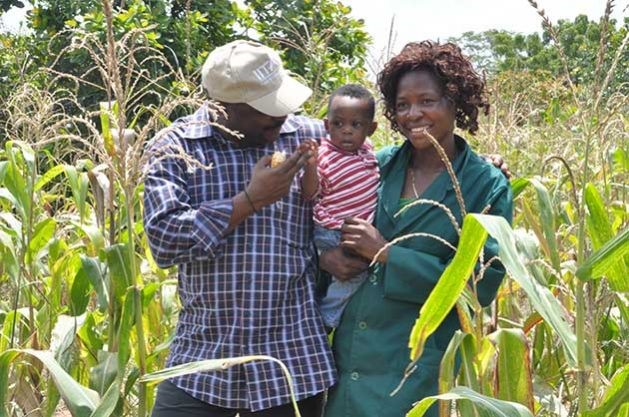 IBADAN, Nigeria, March 4, 2021 (IPS) – Africa’s population will double by 2050 if growth rates continue their trajectory, but the creation of jobs is not keeping pace, with up to five times more young people seeking employment each year as there are new posts to fill. And, on top of this, the COVID pandemic is plunging Africa into its first recession in 25 years.
But once again agriculture is demonstrating its crucial importance in times of crisis. A recent World Bank survey of five African countries showed that more people are turning to agriculture because of the economic impacts of the pandemic: “There is evidence that the agriculture sector is serving as a buffer for low-income households in the region, similar to the role it played during the 2008 global economic crisis.”

In Ethiopia for example, 41% of households that received income from agriculture in the last 12 months reported a loss of income. But 85% of households experienced income loss from non-farm family business and 63% reported a decrease in remittances.

With a larger population relying on agriculture both for food security and as a source of livelihood, women and youth will play a particularly critical role in the development of farming in sub-Saharan Africa where 40% to 60% of all employed women work in agriculture.

With shifting demographics, it is important that we examine the role women and youth play in ensuring food security in sub-Saharan Africa and understand how these dynamics are changing and pinpoint the old and new challenges faced by women.

A recent study supported by the non-profit International Institute of Tropical Agriculture (IITA) found that among final year university students in north-west Nigeria, young women are just as likely to express the intention to engage in agriculture after graduation as men. The World Bank estimates, however, that currently, women account for about 37% of agricultural output in Nigeria. Increased investments in boosting the position of women in agriculture could significantly benefit productivity.

CGIAR, a global partnership embracing numerous organizations engaged in food systems transformation, argues that attention should not rest on inflated estimates of how much food women ‘produce’, but rather on “recognition that removing barriers that limit women’s potential could have the double benefit of raising incomes of women farmers and making more food available for all”.

The barriers to a higher agricultural output cannot be attributed to a single cause. Terri Raney, editor of FAO’s The State of Food and Agriculture report, writes: “Women farmers typically achieve lower yields than men, not because they are less skilled, but because they operate smaller farms and use fewer inputs like fertilizers, improved seeds and tools.”

A 2018 World Bank report detailed gender gaps in property ownership in sub-Saharan Africa. One of its key points was that women are less likely to own land or housing than men.

More barriers are being raised to women’s involvement in agriculture however as, under pressure from global food security issues, governments in sub-Saharan Africa are leasing large tracts of land to foreign countries and companies. OXFAM, in a report on land-grabbing, stresses that this often comes to the detriment of rural women: “As soon as a natural resource gains commercial value on the international commodity market, control and decisions over that resource pass swiftly from rural women into the hands of men.”

While accepting that sub-Saharan Africa needs investments in agriculture, attention must be paid to how rural workers, especially women, may not benefit from these deals.

IITA has launched 80 research fellowships for young African scholars, with a specific emphasis on young female professionals and students, through a project funded by the International Fund for Agricultural Development (IFAD).Enhancing Capacity to Apply Research Evidence (CARE) is aimed at the development of effective agribusiness policies that engender success for young people in sub-Saharan Africa.

IFAD is increasingly focusing its resources on young people as a priority, as successful rural transformation hinges on their inclusion in the process.

IITA’s youth programs such as the IITA Youth Agripreneurs (IYA), Empowering Novel Agri-Business-Led Employment (ENABLE Youth),Young Africa Works, and Start Them Early Program (STEP) are focused on encouraging the participation and engagement of young school children and youth in agribusiness. Investing in the future of Africa’s younger generation emphasizes the importance of raising the ambition of primary and secondary school students to guarantee a food- and nutrition-secure continent. This would also be important in developing young female leaders in agriculture and how their acquired leadership skills will enable them to help lead the COVID-19 response and recovery efforts.

IITA and partner organizations such as the African Development Bank, Mastercard Foundation, IFAD, and Oyo State Government, believe that poverty, hunger, and malnutrition in Africa cannot be addressed without putting into consideration the constraints faced by women and young farmers who in most communities provide most of the agricultural labor on the family farm and process food for markets as well as family consumption. Those constraints are a focal part of the research supported by IITA through its CARE project.

In Cameroon, Djomo Choumbou Raoul Fani examined the contributions and competitiveness of young female farmers, and his recommendations include changes to land tenure systems, price controls and credit systems.

Oluwaseun Oginni’s research found that 43% of young people migrating to urban areas from the countryside in Nigeria are female, with their main reasons cited as the search for “a better future, educational opportunities and marriage”.

Cynthia Mkong analyzed the motivations of students choosing agriculture as their university major in Cameroon where female unemployment is double that of men. Mkong recommends focusing on policies that improve the education of girls and increase the household income at all levels. These changes are likely to reverse declining youth interest in agriculture.

IITA’s CARE project is enabling women to bring different experiences, perspectives and skills to the table that can contribute to decisions, policies and laws that work better for all. Their lead role is now ever more critical in COVID-19 response and recovery efforts.

As we mark International Women’s Day on March 8, IITA is committed to fostering greater involvement of women so that IITA can play a more significant role in research and in the world. Women are the leaders and builders we need.

The author is Director General, IITA