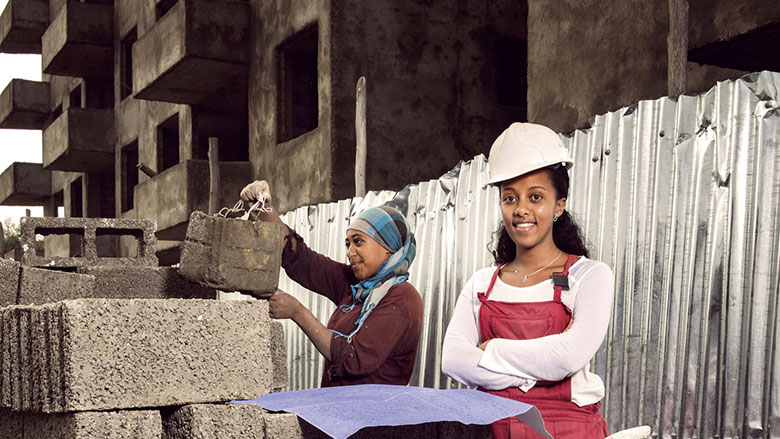 Skilled women entrepreneurs carrying out major construction work on major high-rise building in Africa and smiling at the camera: By Diariétou Gaye, World Bank Director of Strategy and Operations for the Africa Region

Africa is the only region in the world where more women than men choose to become entrepreneurs, a phenomenon that is not the subject of adequate discussion. Expanding the opportunities for female entrepreneurs through policies that foster gender equality would have a tremendous impact on Africa’s growth. Simple and inexpensive solutions have been proven effective and should be adopted on a wider scale.

While both male and female entrepreneurs face such constraints as a lack of capital, women are specifically impacted by a number of obstacles, such as discrimination and the dearth of collateral. As a result, female-owned enterprises post monthly profits that are on average 38 percent lower than those of male-owned enterprises. Three factors account in part for this under performance: the lack of capital, the choice of business sector, and commercial practices.

Data collected in ten African countries indicate that on average, male-owned enterprises have six times more capital than female-owned enterprises. The fact that women have less access to assets affects their ability to obtain medium-sized loans and, in turn, impacts the growth of their enterprises. This problem can be counteracted in two ways: by giving women more control over assets through, for example, the granting of joint property rights (as is the case in Rwanda) or by eliminating the need for collateral. In Ethiopia, psychometric testing measuring honesty and willingness to repay loans offers a promising solution, as demonstrated by a World Bank initiative involving a partnership with one of the country’s financial institutions. Take, for example, the case of a female Ethiopian entrepreneur who owns a bakery and who, for more than 10 years, was able to obtain only group loans capped at 900 euros. Through psychometric testing, she was able to obtain an individual loan, expand her business, and diversify her income.

The choice of sector

In Africa, female entrepreneurs tend to confine themselves to the traditionally female sectors not because of a lack of skills or access to capital, but rather a lack of information (women are often unaware of the fact that they earn less than men) and social factors. A study conducted in Uganda indicates that women who, during their youth, had male mentors who encouraged them to consider sectors reserved for men are more inclined to make a foray into these sectors. In Guinea and the Republic of Congo, programs that encourage women to transition toward traditionally male-dominated sectors by providing them with appropriate information and mentoring programs, among others, are being tested.

In Togo, training aimed at fostering proactive behaviors among entrepreneurs rather than teaching them basic commercial skills has had a significant impact. The idea is to teach small entrepreneurs to show initiative, be proactive, and demonstrate perseverance. This training is yielding impressive results as the female trainees have seen a 40 percent average increase in their profits. One example of this is a female entrepreneur in Togo who, prior to the training, merely rented wedding dresses. After receiving the personal initiative training, she decided to expand her clientele by selling dresses and offering such accessories as veils and gloves. She now owns boutiques in three African countries. Entrepreneurial training of this nature was so successful in Togo that eight other countries have also decided to offer it.

This offers proof, if any were needed, that inexpensive solutions exist to support female entrepreneurs in Africa and that minor changes, such as modifying the type of training offered to women can alter their fate … and the fate of the African continent.