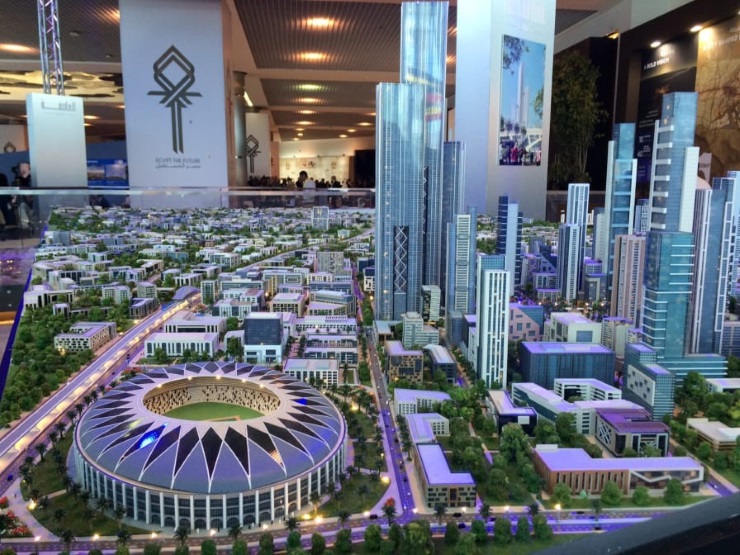 Work is currently underway on some of the largest construction projects ever completed in Africa as the continent builds key infrastructure to support its fast growing population.

Below is a list of the top 10 major infrastructure projects in Africa.

The Grand Inga Dam, a proposed hydroelectric dam at Inga Falls on Congo River in the Democratic Republic of Congo, tops the list of the top 10 largest construction projects in Africa

The dam is designed to have an average output of 39,000 MW annually, nearly twice as much as the Three Gorges dam in China – making it the world’s largest hydropower scheme.

Grand Inga Dam is expected to cost an estimated $100 billion, including the cost of transmission lines needed to carry its power across the continent.

The project was expected to begin by December 2016. However, in July of that year the World Bank withdrew its funding following disagreements over the project.

Construction of housing units in a new, yet-to-be-named, administrative capital of Egypt has been completed but delivery will be within a year once key facilities have been installed.

Located 45 kilometres east of Cairo, the smart city has 21 residential districts and 25 commercial districts. The city will have a recreation park double the size of New York City’s Central Park, 90 square kilometres of solar energy farms, and several artificial lakes.

Other key features include a technology park, 40,000 hotel rooms, a theme park four times the size of Disneyland, 2,000 educational institutions, 1,250 mosques, 663 hospitals and clinics, and a new international airport.

Transfer of government ministries, foreign embassies, parliament, and presidential palaces is expected to take place between 2020 and 2022 at a cost of $45 billion.

The total cost of the venture is yet to be disclosed, but the city is indeed one of the biggest construction projects in Africa.

Kenya has embarked on construction of a $14.5 billion technology city in Machakos County in a bid to attract technology talents and investors to drive its economic growth.

Konza City, which is located 64 kilometres south of the capital Nairobi, is modelled around the US Silicon Valley – hence the moniker “African Silicon Savanna”.

Konza has so far attracted several wealthy investors including a leading Korean university.

Africa’s richest man, Aliko Dangote, is building a huge oil refinery in Ibeju Lekki district, on the outskirts of Lagos, Nigeria at an estimated cost of between $12 billion and $14 billion.

With a capacity to process 650,000 barrels of crude a day, Dangote Oil Refinery will be one of the world’s biggest oil refineries when it begins operations in 2022.

The refinery, which is expected to generate 9,500 direct and 25,000 indirect jobs, will produce Euro-V quality gasoline and diesel, as well as jet fuel and polypropylene.

While Dangote took on a $3.3 billion syndicated loan, which Standard Chartered Plc arranged, about 60 per cent of the Dangote Oil Refinery will be self-funded.

The 1,400-kilometre Lagos-Calabar railway, which will be built at a cost of $10 billion, is without doubt one of the major infrastructure projects in Africa.

The project, which was initially contracted to a Chinese company, is being eyed by Ameri Metro Inc., based in the U.S., after the Chinese failed to raise the funds.

On completion, the Lagos-Calabar railway will connect the cities of Port Harcourt, Uyo and Aba – thereby enhancing movement of goods and services in the region.

Tanzania has embarked on the construction of an $11 billion mega port at the Swahili historical town of Bagamoyo as it races to become a regional economic powerhouse.

Majorly funded by China, Bagamoyo Port is expected to handle 20 million containers a year by 2045, making it the largest such facility in East Africa.

The project is a tri-State venture between Tanzania, China, and Oman. State-owned China Merchants Port is building the port while an Omani sovereign wealth fund will establish a 1,700 hectare special economic zone adjacent to the port.

Kenya is building a 969-kilometre standard gauge railway from Mombasa to Malaba at a cost of $9.9 billion, in what is billed as one of the largest and most ambitious transport infrastructure projects in Africa.

The first phase of the project, which spans 472km from Mombasa to Nairobi, has been completed at a cost of $3.27 billion; while phase 2A – from Nairobi to Naivasha (120km) is currently under construction at a cost of $1.5 billion.

Modderfontein New City is a Chinese-funded $8 billion city that is being built in Modderfontein, Johannesburg-South Africa, as a hub for Chinese firms investing in Africa.

The 1,600 hectare metropolis, to be known as Modderfontein Mega City, is designed by the Shangai Zendai Group and is the company’s first venture estate.

Work for the proposed Modderfontein Mega City, whose groundbreaking was held in 2015, is expected to be completed in the next 15 to 20 years. The city will include commercial, industrial and residential components.

Nigeria is undertaking construction of a mega hydropower dam as it seeks to boost its energy production. Dubbed Mambila Hydroelectric Power Project, the facility which has been planned for more than three decades is one of the biggest construction projects in Africa.

The Mambila Hydroelectric Power Project, which is being undertaken by China’s Sinohydro Corp at a cost of $5.8 billion, will be connected to three dams across the Donga River in Taraba State, Nigeria. The facility will have a total installed capacity of 3,050MW of electricity.

The Grand Ethiopian Renaissance Dam, formerly known as the Millennium Dam, is a gravity dam under construction on the Blue Nile River in Benishangul-Gumuz in Ethiopia.

The Grand Ethiopian Renaissance Dam will be the largest hydroelectric power plant in Africa, and the 7th largest in the world, once it gets completed.

It is estimated that the reservoir will take five to 15 years to fill with water.

The $4.8 billion facility is, however, facing criticism from rights groups who argue that it has displaced nearly 20,000 people.

Shaun Jayaratnam : US-China Trade War And Its Impact On Africa